260,000 People Threatened by Dam and Irrigation Development in Ethiopia

Ethiopian government development plans in the lower Omo Valley are endangering 170,000 people from ten ethnic groups near the Omo River, and at least 90,000 people from seven more groups near Lake Turkana, Kenya. Reports of killings, rape, beatings and imprisonment have followed from a military-implemented resettlement program in the Lower Omo.

This all began with the construction of the Gibe III Dam which started in 2007. The dam has already reduced the annual floods of the Omo River that these groups rely on and will end the flood, permanently, when construction is complete in 2014. The dam’s regulation of the flood has allowed for a mass irrigation scheme along the river. A 175,000 hectare (675 square mile) sugarcane plantation is being installed in the northern portion of the valley and various other cotton, palm oil, and grain plantations from foreign companies are being installed in the southern portion. 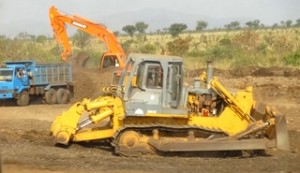 In order to make way for the plantations, the government is implementing a forced resettlement program for the pastoral people, which includes giving up their cattle to become sedentary farmers and has resulted in human rights abuses. The offtake of the Omo River water for the plantation will drastically affect the inflow into Lake Turkana, as the Omo River provides 90%. This will reduce the Lake level by up to 20 meters (60 feet), making it unusable for the people that depend on the Lake for their survival.

Donors, UK Department for International Development (DFID) and the United States Agency for International Development (USAID), have been accused of providing funding used for developing the resettlement program (DFID) and ignoring abuses by the Ethiopian government while investigating these resettlement programs (USAID and DFID).